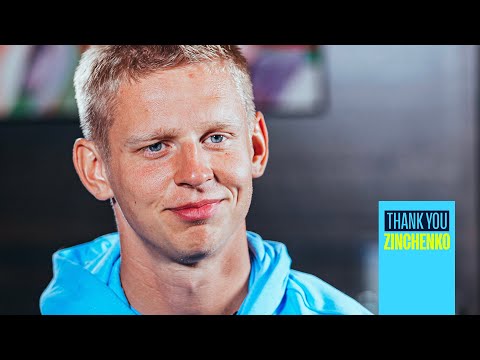 Zinchenko: I am so grateful to City and the Club’s amazing fans

Oleksandr Zinchenko has paid a special tribute to the Manchester City fans for their unwavering support during his six years at the Etihad Stadium.

The Ukrainian defender/midfielder has joined Arsenal after a hugely successful spell in Manchester that saw him make 128 appearances and win 10 trophies along the way.

The 25-year-old established himself as a key part of Pep Guardiola’s squad during his time at City in his farewell interview with mancity.com, he thanked the boss, his coaching staff and all of his teammates for the way they had helped him develop.

But, in the wake of an emotional year that saw war break out in his homeland, Zinchenko was especially keen to voice his appreciation for the way the City faithful had continually backed him to the hilt.

“I was not really ready for this day,” said Zinchenko. “It’s a sad day but this is life, and you have to carry on.

“I am so grateful to everyone who has a done a lot to help me and my family.

“We achieved a lot of titles and I want to say a massive thanks to all the fans and the Cityzens
“They have supported all this time and especially in the toughest time of my life and the war started.

“I felt amazing support around myself, and my family and I can’t be grateful enough for all they have done for me.

“I don’t know what I would have done without that support. You are fantastic and you are the best.
“I would also like to say thanks to Pep and the coaching staff for believing in me and for everything they have done for me and to my team mates and everyone else at this incredible club.

“I’m so happy that one day I can say to my grandsons and granddaughters that I was small part of this amazing club.”

Play the video to watch Zinchenko’s farewell interview in full…